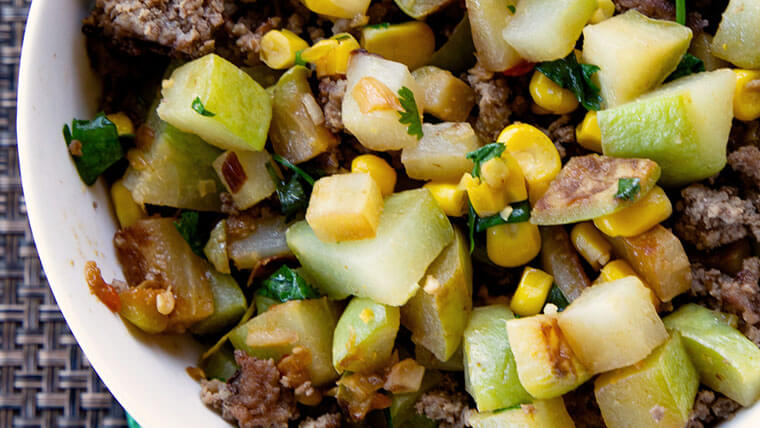 I had this dish at what I call a food booth on Panama City’s main pedestrian-only shopping street close to the old Casco Viejo district. For those discriminating foodies who question whether the photo actually shows mirliton, you’re right, it doesn’t.

My local supermarket doesn’t carry mirliton, so I used a vegetable in the same family that has a similar color, texture, and ability to soak up flavor: cucumber. You treat cucumber for this dish just like you would mirliton: peel, seed, and chop into chunks. Both cook for around the same length of time. When looking for mirliton in the market, you’re probably going to find it under its Spanish name: chayote.

To make this dish, season some flour with salt and pepper and toss beef stew meat in the flour and then sear the beef in a little oil in a hot pan until browned on all sides. Cover meat with beef stock, cover pan and simmer until beef is tender (about an hour or so). Now add sliced onion, sliced green bell pepper, and chunks of peeled and seeded mirliton (or a substitute such as a cucumber or a summer squash). Simmer until vegetables are tender, and taste for seasoning.