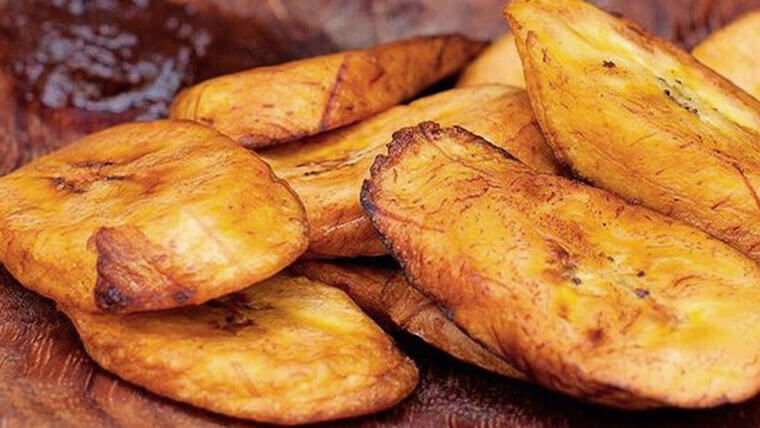 This can be the starch for a main dish, like patacones are, or a dessert. Unlike patacones, though, you use ripe plantain, which is yellow with patches of black. When you fry them they become soft and sweet.

You peel the plantain as usual by cutting off the ends, making a cut in the skin the length of the plantain, and peeling the skin back until the plantain can be removed. If the plantain doesn’t peel easily it’s probably not ripe enough. (Plantain hit a stage in between green and ripe where they’re difficult to peel.) When your plantain has been separated from the peel, cut it in half crosswise and then halve it again lengthwise.

If making a starch I fry them in a couple of tablespoons of oil, but if making dessert I fry them in butter; in either case, you fry them on medium heat until they’re soft and caramelized on both sides. For the starch, you season them with salt, but for the dessert ones you season with a mixture of sugar and powdered cinnamon. For a more elaborate dessert, you could serve them with vanilla sauce. Use half to one plantain per serving, which means two to four fried quarters.